skip to main | skip to sidebar
WASTING TIME (MINE & YOURS)

I get e-mail updates from the lovely Amanda Palmer of the Dresden Dolls. As some of you probably know, Amanda released solo record a couple of months ago called Who Killed Amanda Palmer? and its quite excellent. She's been releasing videos with startling regularity and the latest is for the song "Leeds United".
According to the e-mail that I received yesterday:

This video has a somewhat sordid backstory.

if you were at my london show, you already know this, because i mentioned it from the stagem but for the rest of you, hear ye.

the fine folks at roadrunner records wanted us to re-cut this video so that shots of my belly wouldn't be included. they basically told me that I looked too fat. i told them to fuck off.

the saga continues, but i'll fill you in later.

Roadrunner Records thinks Amanda is too fat. I watched the video, incredulous because I've seen Amanda in person and she could be described as petite, I thought.
If this girl is fat then I must look like Jabba the Hut and that's terrifying. But she's not fat, it's just the music industry being their usual c@cksuc#ery selves. I'm delight that Amanda told them to "f^c# off" cause if it had been me I would have edited the video and never left my house again.
I'd boycott Roadrunner but they have been good to the Dresden Dolls and they also have DragonForce on their roster.
But geez, what is this world coming to?

Posted by Misty Beethoven at 9:05 AM 3 comments:

I liked it better than I thought I would.

That's really about it.

Guy Maddin's Twilight of the Ice Nymphs is pretty cool, too. It is in no way related to the movie I saw today.
Posted by Misty Beethoven at 4:08 PM 1 comment:

Okay, it's true. I've preordered my movie ticket for Twilight. I have no shame, I know. The book was good, dangit. Cheesy, yes, but damn entertaining. Let's hope the movie offers the same. My expectations aren't so very high. Matt's really happy that I'm not dragging him with me cause he thinks the movie looks douchey, which it does, I admit.
Also, Sukiyaki Western Django is one of the coolest movies ever. Takashi Miike is such a freak, such a complete badass. I'll do a proper review soon, I think, though it will be hard to it into words.
Posted by Misty Beethoven at 9:42 AM 1 comment:

Catching up on video 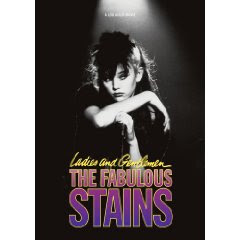 Despite my nutty schedule, I’ve been able to get in some quality movie watching. I’ve seen some great stuff, some crappy stuff and some unclassifiable stuff.

First up, The Beastmaster. So bad I fell asleep on purpose and then contemplated divorcing my husband who foisted this tripe on me.

Next night was Ladies & Gentlemen, The Fabulous Stains. Excellent movie, top notch. Compared to The Beastmaster, it’s the greatest movie ever made. It’s not, but it felt like it that night. It’s got an almost prepubescent Diane Lane as a rebellious punk who inadvertently starts a music movement. Ray Winstone is so young that I completely did not recognize him at all. This cool movie also features members of the Sex Pistols, Laura Dern, Brent Spiner (Data from Star Trek) and Elizabeth Daily (Dottie from Pee-Wee’s Big Adventure).

Saturday night was not so great. We ordered up the new Madonna movie, Filth and Wisdom, from the OnDemand network. Like Atlanta indicated, it was pretty much useless nonsense. Poor Eugene Hutz needs to stick to touring with Gogol Bordello. There’s not much use in playing yourself in a movie unless it’s a documentary (this is NOT). Hutz is reduced to silly dialogue in which he spouts endless Ukrainian folk sayings (“we have a saying in my country…”) that come off like goofy Dave Barryisms. The movie is about three roommates, two of whom use sex to make money. There’s a stripper who never even strips in the movie. Hutz is a joke as a male dominatrix who spanks guys and makes them lick his boots. Makes me long for Wristcutters: A Love Story in which actor Shea Whigham does Hutz better than Hutz does Hutz (does that make sense?). It’s comical, not sexy or even a tad bit threatening. There’s no filth to be found, and certainly no wisdom. There’s some good music thanks to Gogol Bordello, but really it’s a waste of 84 minutes. Still, it’s better than The Beastmaster.

Finally, after nearly 8 years of waiting, the Flaming Lips have released their cinematic opus, Christmas on Mars. After 8 years of waiting, it delivers pretty much just what you were expecting if you saw the original trailer released in 2003. The Lips created an interesting (albeit a bit pretentious, of course, and a tad too long) exercise in music and filmmaking. The movie is about a space station set up on Mars. All of the astronauts are starting to lose their minds due to isolation and a lack of oxygen. They see all sorts of crazy, sometimes upsetting hallucinations that often feature large vaginas. There’s a new baby on board and the baby is struggling to survive. Also, Wayne Coyne is an alien (in the movie and probably in reality, too). Coyne the green alien comes to bring peace and love and joy and oxygen to the deteriorating crew. It’s silly and fun and the music is delicious. It’s a bit overlong but it’s a must-see for any Lips fan.

I wrote a novel, sorry about the long post.

HAPPY BELATED TO EMILY! Much love to my wonderful dear friend!

Oh, and the new Ricky Gervais HBO comedy special made me laugh so hard I had tears rolling off my face. It was the funniest thing I’ve seen in ages. Reminded me of how funny Eddie Izzard once was.
Posted by Misty Beethoven at 1:41 PM 1 comment:

Happy moment in my cruddy day 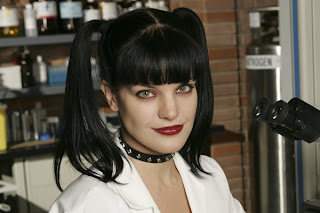 Wow, I've just been having a rough time at work lately. It's been show after show after show, 6 days, 7 days a week, 10 hr days, 12 hr days, etc etc etc. Personality clashes are ongoing while I try to remain positive and diplomatic. It's difficult when I've had a turdy stinky butt of a day and I have to be the one greeting the patrons with a smile as they arrive.
A nice gentleman arrived with his wife to pick up tickets. I gave him his tickets and he thanked me. Then he gave me a strange look. He stepped away and then once again approached the ticket window. He said the following magic works, "Has anyone ever told you that you look just like that girl on NCIS"? I knew which girl he meant.
Giddy me!
I replied, "yes, my husband says "That's YOU!" every time she's on the screen". Then man laughed and said, "well, she's a nice-looking lady". I thanked him, probably a bit too profusely, but I LOVE Abby.
I know it's a bit trite, but I love Abby and I adore Pauley Perrette. First of all, Pauley was in Almost Famous, the greatest movie ever made. Also, she's 39 years old and she looks about 25. I know makeup on tv is impressive, but that woman is lovely.
Seriously, I know I don't really resemble Abby other than the goth girl look, but it really made my day. ♥
Posted by Misty Beethoven at 9:04 PM No comments:

All work and no play

Wow, it's been nearly two weeks since I posted. I'm not slack, I'm just working...almost constantly. The theatre world runs in cycles, the busiest times are Oct & Nov, then Feb & March. I have little to post about work, it's been fine other than simply having to be physically present all the time.
This weekend was a massive disappointment. Matt and I preregistered at the Nekocon anime convention which takes place just around the corner from my home. Sadly, Matt was out of commission and I was having to work a great deal more than anticipated. I missed out on a lot of the fun stuff. Fingers crossed that next year may be better.
Fun anecdote regarding my brief visit to Nekocon:
I decided to wear my fun clothes and put on a new dress. It's tight and semi-short and it's made mostly of green and purple vinyl. It's a delightful dress, I figured it was perfect for a comic sort of look. I was walking around a cherubic young man asked me (rather flamboyantly) if he could take my picture. I said sure, but I let him know that I wasn't wearing a costume and wasn't really representing a character. He gasped and replied, "Oh my God! So that's just how you dress???!!!"
Yes. Even the anime geeks think I'm a weirdo. I think I may be reaching new lows. I don't care. I'm still gonna rock that dress.
Posted by Misty Beethoven at 2:06 PM No comments: 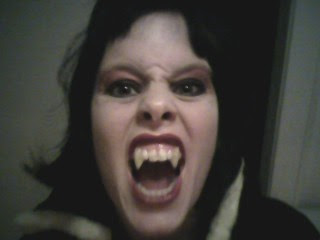 Though it's now technically Nov 1, I would still like to wish everyone a Happy Halloween! Let's celebrate all year long!
Posted by Misty Beethoven at 12:02 AM No comments:

Blogs by people I enjoy